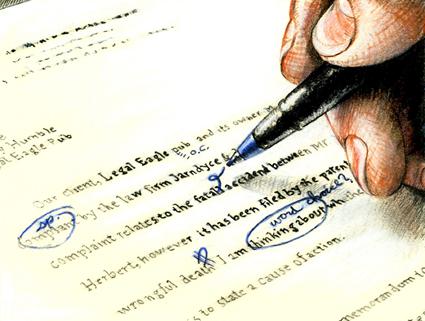 While it is easy to assume that “writing is writing,” legal writing is different — and similar — to other types of written communication. The same desired results still apply: get rid of the mess, cut out the clutter and try to make your writing concise and clear. Sure, it sounds easy. Why do many attorneys have trouble then writing a clear sentence. Because it is not easy, that’s why.

With such a variety of words to use and plenty different ways to express them, it’s a puzzle that we’re not frozen by being unable to decide when we sit at the laptop and try put down a worthwhile sentence. Well, many people are confused by the choices.

There are some ways to a good writing style. Remember these five tips and you’ll be able to figure out how to be a good legal writer.

1. Stay Away From Abstract Words

A typical attorney’s thoughts are tornados of legal, abstract abstractions. You already know enough of them to fill a book. Words and phrases such as property interest, predecessor corporation and so on, is the cloud that rains on the parade of good writing. Sometimes it needs to be done.

Frequently there isn’t a way to get the point across other than lawyerly-speak. An abundance of abstractions though will kill your poetic prose. Try switching from an abstract word to a concrete when there is no legal import. Instead of saying that an “employee’s job was unilaterally terminated” try “…fired Mr. Jones.” Throw out “…seized the perpetrator” and replace it with “…arrested Mr. Johnson.”

See how easy it is? Stop telling your reader what the conveyed information is and show them. Get away from empty legalisms and, when you’re not sure, choose the definitive word.

Throw the passive voice in the trash. Practice writing in the active voice and you will quickly head towards a clear writing style.

Switching from the passive to active voice isn’t only desirable, it’s simple. Show the reader exactly who is who is performing the action and put the character at the sentence’s beginning. Instead of saying, “…the lease was broken” try “…the tenant broke the lease.

Putting the primary character in each sentence at the beginning will clarify your meaning in the reader’s thoughts.

Over 50 percent of writing is rewriting. Many times we’re unsure what we intended to convey until we’ve gone over first drafts of our writing. As the piece is written, and rewritten, remember, nothing is holy and untouchable. Prune. Cut. Shorten those sentences. Get rid of the complicated and plug in the simple. Lose the lawyerly loquaciousness, the pompous gibberish and the undesired legal lingo. Feel free to use words with less than four sylables and use bullet-points to highlight informative lists.

A document stuffed full with text will turn-off readers. It’s better to disrupt the monotony with headings that can provide a map to comprehending what is being said. Often, using sub-headings is a great idea also as it gives blood-shot, weary eyes some relief.

One example is how this article is written. It can work just as good with legal compositions. Keeping the headlines sharp and incorporating your thoughts as an advocate is nice too. Instead of “The Three Items for Recovery under the False Claims Act” use “Plaintiffs Fail to Prove the Three…”

If it’s good enough for magazines and publishers, it should be good enough for you. Give someone else that piece of writing and see what they come up with when they read your work with a fresh viewpoint. Try to make the writing readable by legal novices. Even if you dip your pen into complicated working occasionally, you’ll see how to write the simple over the complicated.

Ask your volunteer editor if what they just read makes sense. If it doesn’t, then rewrite until they get it.