The challenge of a will occurs after the maker (testator) passes away. Beneficiaries or heirs who think that they have been treated unfairly are the most likely to challenge the validity of the decedent’s will. However a creditor or other interested party could also challenge an accounting if they think that the fiduciary (executor or personal representative) has breached their fiduciary duty. The person making the will contest or challenge must file a proceeding with the New York Surrogate’s Court. It is up to the Court to make a ruling on the matter after hearing and reviewing all the evidence. The parties in these matters almost always retain the legal advice and representation of a New York wills attorney.

A will can be contested for the following reasons:

The will was not executed properly

There are certain formalities that must be followed when a person makes and signs a will. A will must be in writing. Holographic wills (handwritten wills) are typically not accepted as valid wills in New York, although there are exceptions for someone who is in the military facing a life and death battlefield situation. There must be the correct number of witnesses present, the witnesses and the testator must sign the will properly and the testator and the witnesses must be 18 years of age or older.

When another family member or beneficiary intentionally manipulates the testator into leaving their assets to them by controlling and manipulating the testator, and their actions cause harm to others, this is considered undue influence or coercion.

If someone is not of sound mind at the time they make a will, then they may be found mentally incompetent and the will be considered invalid under New York law. It is not uncommon for older people with Alzheimer or dementia to become victims when others take advantage of their condition and attempt to benefit by getting them to leave all or a substantial portion of their assets to them, thereby depriving other family members or heirs of their rightful inheritances.

Any beneficiary, heir or interested party can contest an accounting if they have proof that the fiduciary of the estate (executor) acted in a manner that was reckless and breached they fiduciary duty. 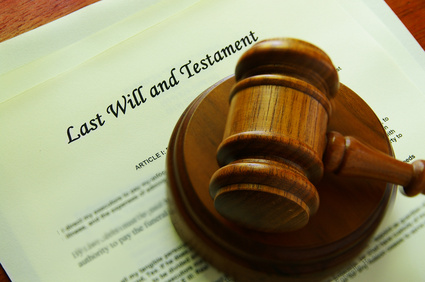 A will can be contested for a variety of reasons

So let’s say that your mom was diagnosed with dementia. You find out after she passes away while attending the reading of her will, that she intentionally omitted you from her will. You become suspicious because she updated her will a couple months before she died, leaving everything to her nurse/caregiver Susie. The version of the will you have is dated five years prior to her death before she was diagnosed with dementia and leaves you, her sole heir, all her assets. You know that your mother’s mental condition had deteriorated greatly because she didn’t even recognize you during the time period she allegedly made the new will. You believe that Susie used her confidential relationship with your mother to get her to change her will. You even think that Susie may have forged your mother’s signature and used her friends to act as witnesses to the will.

However, your NYC probate attorney told you that suspicions won’t hold up in Court and that you will need to obtain copies of your mother’s medical records showing she was mentally incompetent at the time she made the will. You were also advised by your attorney that you will need the testimony of your mother’s doctor at the will contest hearing or another medical professional that cared for her to confirm her mental condition. You may also need to hire a handwriting expert to determine whether the signature on the will was your mother’s signature. The situation is extremely upsetting and stressful for you, but you know that your mother’s wishes were for you to inherit all her property, so you present your evidence to the Court hoping that the judge rules in your favor.

Your father passes away, and your uncle is designated as the executor of his estate. Your uncle sells your dad’s New York house for $500,000 to a friend. You were unaware of your uncle’s relationship with the buyer, and you did not know that the house was appraised at the fair market value of $1,000,000. Your uncle then buys back the property in his name from the friend for $550,000 a month later, again without your knowledge. Your uncle’s friend pockets his $50,000 profit, and your uncle gets to purchase the property for almost half its value. A couple months later after your dad’s assets have been distributed to you, and the estate is wound up and closed, when you find out that your uncle sold the property to a cash buyer for $1,000,000. You realize that uncle received a $450,000 profit for himself. It is clear to you that your uncle cheated you out of your inheritance by approximately $500,000.

Since your uncle, the executor of your dad’s estate, personally profited from the sale, this would be considered a conflict of interest and breach of fiduciary duty. You could challenge the accounting by filing a proceeding with the New York Surrogate’s Court and asking the Court to reopen the estate and make your uncle reimburse you for your losses out of his own pocket. Of course, you would need to provide the home appraisal, the purchase and sale documents and produce witnesses that could establish your uncle’s friendship with the first buyer. With the assistance of an experienced New York estate attorney representing you at the hearing, you are confident that you will win the challenge and receive the remainder of your rightful inheritance.

Getting the Right Legal Help

Keep in mind though that just because an heir disagrees with the decisions of a loved one, it does not automatically mean that there are sufficient grounds to contest or challenge a will or an accounting. A person must have solid evidence. Because will contests and challenges are complex, hiring a New York probate and estate attorney to represent you is crucial to obtaining a positive outcome in your favor. Daniel Kron represents estates, beneficiaries, heirs and other interested parties to an estate in connection with all estate and tax matters, including will contests and challenges.

If you need assistance with a will contest or challenge, you should give us a call now. We will help.